On the evening of May 25, 1888 George I. Tyson, a prominent summer resident of Riverside and an enthusiastic yachtsman, invited 10 of his friends to meet with him at his home to consider and act upon his plan to establish a yacht club in the community. George Tyson provided an acre or so of waterfront land, and he offered to finance the construction and equipping of a clubhouse. In return for this, a token rental was charged. According to the Lloyd's Registry of American Yachts, Riverside Yacht Club (RYC) became the second yacht club to be established in the state of Connecticut and the eighth on Long Island Sound in order of seniority among those that have survived to the present day.

George Tyson served as Commodore for eight consecutive years. With his yacht, Nirvana, he led the cruising fleet on its annual runs to the eastern end of Long Island Sound. 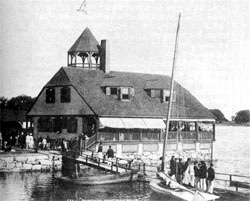 The original clubhouse was built in 1889. By 1893 additional room was needed and an adjacent structure, called the "spar loft" was built on the property. The spar house contained bowling alleys, rooms for shuffleboard and billiards.  When the furniture was cleared, it also served a ball room for summer dances.

During the winter of 1892-93, some of the members conceived the idea of establishing winter quarters in New York City. William Bagg, became an enthusiastic supporter of the idea and generously offered the use of his rooms at 39 West 31st Street for this purpose. The RYC annual meetings were held here up until 1895 after which they were then held back in Riverside.

Around 1927, the RYC membership bought the property from the Tyson estate. The Club's membership had grown and the harbor was filling with yachts. Inter-club racing on Long Island Sound was well under  way.

In 1928, the membership decided that the original club house need to be replaced with a new structure. The new club house was completed in May, 1929. The club was not winterized until 1946. In 1958 the swimming pool and filtration plant were completed. A year later the bath houses were added. In the fall of 1977, at a special meeting of the membership, it was determined that major improvements were need as salt water had done significant damage to the club house foundation. In March, 1978 the club was closed for one year as construction began. The club house foundation was raised 4 feet and other improvements were made.

On May 18, 1997 there was a ribbon cutting ceremony to open the new marina that was dredged to provide 8 feet of depth at low tide. New cement floats were installed, and the number of slips was increased substantially.

In May 2013, coinciding with the Club's 125th Anniversary, RYC completes a major renovation to enhance the clubhouse facilities, create new member spaces, and better serve the members in the future.

The Riverside Yacht Club is, in all its years and in every way, indeed a grand club.